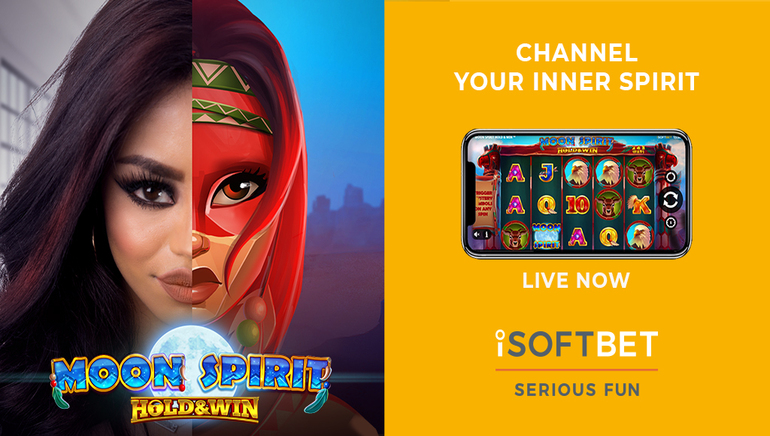 The latest release by iSoftBet features 243 ways to win, multiplying wilds, and a hold & win feature with upgrade mechanics and staggering top prize of 1,000 times the base stake.

One of the leading companies in the game developers' niche, iSoftBet has prepared another surprise for the players across numerous online casinos. The company's latest slot release is name Moon Spirit Hold & Win and it offers an opportunity to embark on an adventure set on the American frontier filled with exciting bonuses and big wins.

The game features 243 ways to win instead of traditional paylines, offering more opportunities to create winning combinations. The wolf symbol will play a big role in achieving this, as it acts both as a wild and a multiplier, doubling the base wins. Wolf symbols appear only on reels 2, 3, 4 and multiply with each other as well, making the maximum win multiplier 8x.

The moon mystery spin triggers randomly, adding mystery symbols to the reels. At the end of the spin, all mystery symbols will turn into the same symbol, further increasing big win opportunities.

In terms of design and overall feel, iSoftBet's Moon Spirt Hold and Win gets everything just right. Top paying symbols are native American male and female warriors, followed by animals such as bears, eagles, and deer. The background music and sound effects such as wolves howling round up the atmosphere of this new release that takes players back in time to experience an exciting adventure.

While the game doesn't have the classic free spins round, there is the Dreamcatcher Hold & Win bonus that is just as exciting. The feature is triggered by landing five Dreamcatcher symbols oywhere on the reels.

The feature kicks off with three respins and all Dreamcatchers starting at level 1. With each new symbol land, respins are reset to three and all adjacent Dreamcatchers are upgraded one level. All symbols contain cash prizes or one of three jackpots (mini, major, and grand), with the higher level ones likelier to contain big wins and larger jackpots. At the end of the round, all values are revealed and added to the win.

While the feature itself is nothing new, iSoftBet has managed to add an interesting twist to it with upgrades and keeping values hidden until the end of the bonus, adding an extra layer of excitement to their latest release.

The luckiest players who manage to upgrade the symbols to the highest, "Totem" level, will receive a staggering prize of 1,000 times their stake, making Moon Spirit Hold & Win a game well worth giving a try.