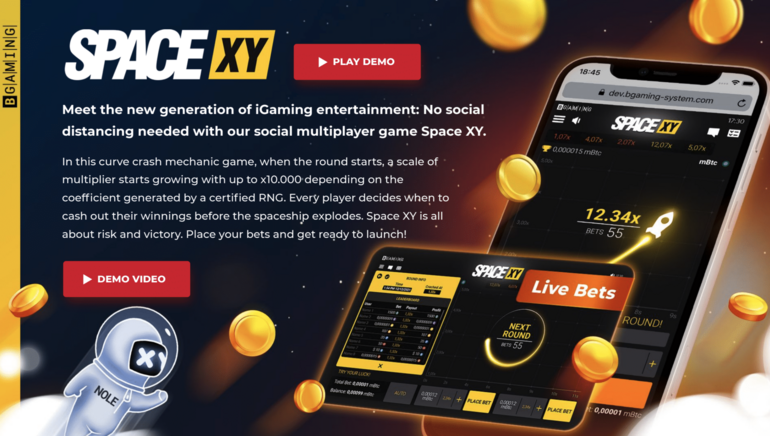 Space XY is the latest release from BGaming, an original space-themed game where players can place multiple bets and take profits whenever they choose.

BGaming titles are defined by originality, uniqueness of the mechanics, and out-of-the-ordinary visuals and sound effects. Each time the software developer releases a new title, players are enthusiastic about what it could bring to the table. Space XY is a shining example of a game that doesn’t fall into the common categories and that’s what makes it special. If you like the idea of conquering space and winning up to 10,000 times the stakes, then this game is worth considering.

The theme of this game is easy to guess by simply reading the name: Space XY. Essentially, you will embark on an epic quest that will take you on a voyage across the vastness of space. Onboard the virtual space rocket, you will watch it fly over X and Y coordinates, aiming for the stars. During its flight, players can place multiple bets and take advantage of exceptional multipliers. When these are triggered, the winnings are greatly enhanced, so the game has the potential of producing huge profits.

Flying too close to the Sun is always dangerous and that’s why you need to jump off the rocket before it explodes. This can happen at any time, so there’s always a feeling of uncertainty that only spices things up and makes the game more exciting. As long as you can anticipate that fateful moment, you will keep all the profits you made so far. The average return to player is 97%, which is above the industry standard and the best part is that you are in for control of your actions.

How to Play BGaming’s Space XY

Don’t let the fact that Space XY is a new game with original mechanics have a deterring effect on you. Its gameplay is astonishingly simple and you can watch several rounds being played to better understand the system. Players bet before the rocket takes off and once they are validated, the spacecraft begins its voyage to the stars. At any point, during the flight players can collect the profits and if the rocket explodes before they do, all the winnings are lost.

Space XY has special features that simplify the mission of players and allow them to fully enjoy the experience. One can view the leader list checkbox, see their history over many rounds, and activate the autoplay feature. The X coordinate represents the time spent flying, while the Y coordinate shows the winning multiplier. Depending on your risk appetite you can place one or more bets and cash them in whenever you like. You can play the game with or without music and sound effects, as you prefer.